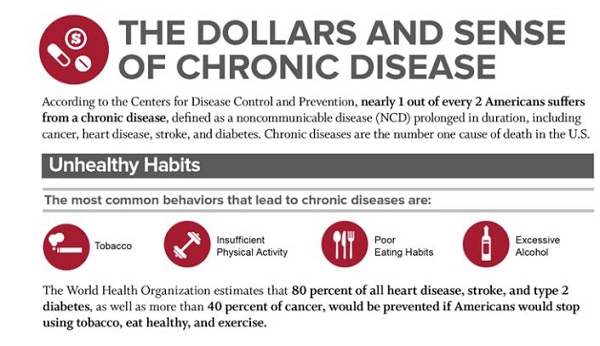 Non-communicable diseases, also known as NCDs, are basically defined as non-transmittable, non-infectious diseases that are either rapid or chronic in nature. According to the CDC;”…nearly 1 out of every 2 Americans suffers from a chronic disease…”

The economic toll that these diseases is having on society is enormous, not only because of the costs associated with treating the conditions, but also because this often causes people to go on sick leave or be unable to work at all. Understanding the economic toll of non-communicable diseases is integral in understanding why individuals need to seek out solutions to these problems.

While some of the diseases within this category simply cannot be avoided, WHO, or the World Health Organization, believes that most of the conditions that fall under this heading are due to smoking, inactivity, poor eating habits and excessive alcohol intake. Furthermore, the organization believes that if Americans were to stop these behaviors, they could greatly reduce the number of people affected by these conditions.

According to statistics released by WHO, about 61% of fatalities around the world can be directly attributed to non-communicable diseases. It is believed that these diseases will have a global economic impact spanning $47 trillion over the next two decades.

The World Bank believes that most of the non-communicable diseases that are having such a strain on the economies of the world can actually be prevented through both primary and secondary intervention. The organization recently stated that, “If nothing is done to reduce the risk of chronic disease, an estimated $84 billion of economic production would be lost from heart disease, stroke, and diabetes between 2006 and 2015 in the 23 low and middle income countries accounting for around 80 per cent of chronic disease mortality.”

At this point in time, the leading causes of death within the Pacific Island Countries are NCDs. According to recent statistics, about 70% of the total number of deaths within this area of the world can be directly attributed to non-communicable diseases.

Many of the risk factors associated with NDCs do not become apparent until a person ages. Organizations such as the World Bank believe that in many countries with currently young populations, aging will become more challenging. In the Pacific Island Countries, for example, the median population age is about 21 years, although many individuals partake in behaviors believed to make them vulnerable to NDCs later on in life. It is likely, therefore, that unless these behaviors are altered, the population might be prone to non-communicable diseases later on. There is already evidence of this. Ian Anderson states; “Rates of premature deaths from NCDs in the Pacific are generally much higher than other lower middle income countries. NCDs also impose significant and growing financial burdens on Ministries of Health and Ministries of Finance.”

According to organizations such as Population Reference Bureau, there is a discrepancy in the way that countries are affected by non-communicable diseases. The organization believes that while middle-income countries will slowly display the losses that are a direct result of NCDs, while low-income countries will show this loss fairly quickly. At this rate, the organization believes, low-income countries should display an increased rate of 8% in the number of deaths that are attributed to non-communicable diseases when compared with the high-income countries. This is not the only difference that has become apparent. Wendy Baldwin and Lindsey Amato state; “Alarmingly, NCD-related mortality is occurring at earlier ages in developing countries: 29 percent of NCD-related deaths in developing countries occur before age 60, compared with 13 percent in developed countries.”

The Most Common NCDs

The most common non-communicable diseases that are thought to be responsible for straining the economies of various countries throughout the world include; diabetes, cancer and respiratory diseases. Mental illness is another condition that takes a toll on economies. When combined, these conditions will cost the world about $21 trillion over the next 20 years. It is only in recent years that the world has started to pay more attention to these conditions and the effects on the global economy.

The cost of healthcare is not limited to this field alone. The economic toll that NCDs have throughout the world affects just about every industry. According to General Motors, it is believed that the health care costs of the employees within the organization are responsible for the addition of up to $2,000 on the average sticker price of a vehicle. This same effect is seen across the board in a variety of organizations and businesses. Ultimately, this means that everyone is paying for the effects of non-communicable diseases.

It is currently believed that the best chance to instill positive behaviors in individuals is to start between the ages of 10 and 24. It is apparently during this time when individuals are most likely to establish unhealthy habits, so it is during this period where they should be tackled. The marketing of unhealthy habits should be limited as much as possible during this time to try and limit the number of adolescents who begin participating in these behaviors. It is thought that, for instance, adolescents who choose to start drinking at a much earlier age are also more likely to become dependent on the substance a decade later.

At this point in time, about $8,086 is spend on each individual within the United States for medical care, although only $251, per person, is spent on actually preventing these diseases before they become an issue in the first place. This shows that the answer might lie in putting more efforts into the prevention instead of attempting to resolve the problem once it occurs.

Some of the more effective strategies that have been implemented to promote positive behaviors include raising taxes on tobacco and alcohol, as well as banning adverts that are specifically targets at adolescents. What is more, promotional materials about healthy behaviors have been distributed to educate adolescents on what sort of changes they need to make to stay healthy.

The economic toll of non-communicable diseases is high, although there are a wide range of options available to governments and organizations attempting to combat this problem.